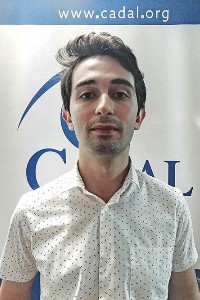 Brazil’s red flags
September 9, 2019
Brazil encompasses many of the problems that affect the region: corruption, street violence, cases of police abuse, and entrenched stereotypes in society that make all these problems in turn become more serious in minorities. In this regard, both Bolsonaro''s sayings and his lack of commitment to the progressive agenda do not help to solve the structural problems of Brazil and the country seems to be going in the opposite direction to which it should go.
Alejandro Di Franco
@Aledifranco98
Tweet

The exchanges between the UN High Commissioner for Human Rights Michelle Bachelet and the President of Brazil Jair Bolsonaro made global headlines, with various actors from Brazil to Chile, to other countries, rapidly taking sides. In Brazil, former presidents and members of the opposition Workers’ Party Luiz Inácio Lula da Silva and Dilma Rousseff have criticized the sitting president; in a more curious case, even Chilean President Sebastian Piñeira, an opponent of Bachelet, defended her and spoke out against Bolsonaro’s comments.

Bolsonaro’s comments toward Bachelet—which included, “Mrs. Michelle Bachelet, if Pinochet’s people had not defeated the left in 1973, among them your father, today Chile would be Cuba”—added to previous comments made in support of his country’s own dictatorship—saying the only error made during that time was to “torture and not kill”—highlight Bolsonaro’s track record of celebrating the continent’s authoritative regimes.

The latest volley of pro-dictator rhetoric rekindled international pressure and criticism that have been levelled at the Brazilian government in recent weeks, particularly in reference to the fires in the Amazon. Although the destruction of the world’s largest rainforest has been a recurring issue over the past couple decades (with its effects this year being less than what they were in the 1990s for example), the global outcry was heightened by the release of a report that showed deforestation increased by 88 percent in June and by the current administration’s attitude toward environmental policies.  Those attitudes and policies range from Bolsonaro’s promise during his presidential campaign to withdraw from the Paris Agreement to advisors’ comments claiming that climate change is an invention of “cultural Marxists.”

Beyond the government’s comments and lax environmental policies, we should remember that issues of human rights abuses and environmental degradation in Brazil did not begin with the current administration.  Rather, they are longstanding structural issues. Even Bachelet acknowledged this issue in 2012, before she assumed her current role of High Commissioner, saying “Brazil has been one of the five countries in the world with the highest number of killings of human rights defenders.”

Likewise, in Brazil’s last UN Human Rights Council Universal Periodic Review, carried out in 2017, the UNHRC working group warned of many problems that undermined the civil rights in the country. Discrimination—including by the State—against the LGBTQ+ community, widespread violence committed by military police, the racially biased street violence, the mistreatment of persons deprived of their liberty and overcrowding in detention centers, were already raised as concerns by the working group before Bolsonaro’s stepped into office.

Violence remains a serious issue in Brazil—Bolsonaro himself was attacked in 2018 while campaigning—and the figures only give an idea of the actual scale: 64,000 homicides, 367 police officers killed, 5,144 killed by the police (a 20 percent increase compared to 2016), and 1,133 femicides registered.

In a way, Brazil encompasses many of the problems that affect the region: corruption, street violence, cases of police brutality, and entrenched stereotypes that escalate the severity of these problems in minority communities. Minorities often face very difficult situations. In the past two years, there have been 765 homicides against the LGBTQ+ community, a vulnerable community that continues to face discrimination in different spheres.  This year Brazil saw the first openly gay federal representative, Jean Wyllys, resign from his post and leave the country over death threats.  And earlier this month Rio de Janeiro’s mayor tried to censor a comic book that showed a gay couple kissing.

In this regard, both Bolsonaro’s comments and his failure to compromise with the progressive agenda have failed (and will continue to fail) to help solve Brazil’s structural problems. The country seems to be regressing instead of going forward. For example, although Freedom House continues to label Brazil as a free country, the organization dropped Brazil’s score by three points in its latest report for, among other things, the political violence  and hateful discourse observed during the presidential campaign, hostile attitudes toward climate change activists, and violence between gangs linked to drug trafficking.

For these reasons, it is important to remember that Brazil faces various structural problems that did not arise overnight and which, in turn, will be difficult to solve, especially when they are minimized or denied by the country’s leadership. Having had a history with military governments, Brazil requires an active and continuous defense of its democracy to maintain a democratic framework. Bolsonaro criticizes Venezuela and Cuba—criticisms that sometimes go too far such as calling for military intervention in those countries—but at the same time attempts to legitimize Pinochet and the dictatorship in his own country. The defense of democracy cannot have an ideological bias, authoritarian advancements from both the left and the right should be called out.