Piñera, PROSUR and autocratic China
April 30, 2019
(The Global Americans) A month after promoting the establishment of PROSUR, Chilean President Sebastián Piñera contradicted the central principles of the new regional bloc during a trip to China.
Gabriel C. Salvia
@GabrielSalvia
Tweet 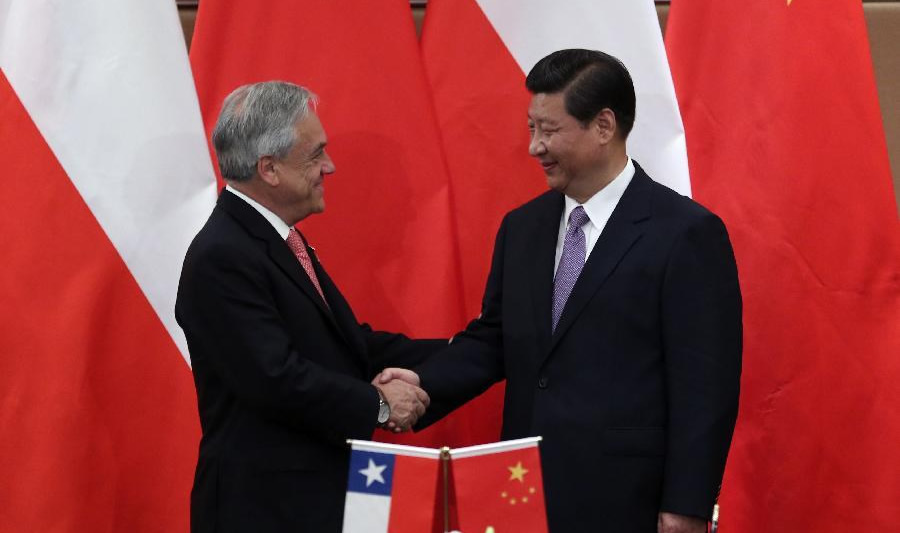 (The Global Americans) Knowing full well that he had an official visit to China on the horizon, it was an awkward decision for the president of Chile, Sebastián Piñera, to promote the creation of the Forum for the Progress and Development of South America (PROSUR), which stipulates a democratic system of government as a requirement for membership. Instead, the next time Piñera criticizes the ongoing human rights violations in Venezuela, Nicolás Maduro will have a ready-made response. It’s a quote supplied by Piñera during his visit to China: “Every country has a right to the political system of its choosing.”

When eight South American countries came together to establish PROSUR in March, point number five of its founding declaration stated “that the essential requisites to participate in this space will be the full validity of democracy, of the respective constitutional orders, respect for the principle of separation of the powers of state, and the promotion, protection, respect and guarantee of human rights and fundamental freedoms, as well as the sovereignty and territorial integrity of states, with respect to international law.”

PROSUR was established on March 22 in Santiago as an initiative of Piñera to replace the Union of South American Nations (UNASUR). Joining Chile as founding members were Argentina, Brazil, Colombia, Ecuador, Guyana, Paraguay and Peru.

The creation of PROSUR raised a series of questions about the complex geopolitical landscape of South America: Is a new multilateral group really necessary in the region? How does the existence of PROSUR conflict with the membership of the same countries in the Community of Latin American and Caribbean States (CELAC), whose democratic clause lacks legitimacy given Cuba’s membership? How does it look that certain founding members of an organization with a democratic clause have recently extolled the virtues of past military dictatorships and overseen an increasingly deadly environment for human rights activists? (Brazil, anyone?) Finally, what will be the policy of PROSUR members toward non-hemispheric countries that are not democratic, such as China?

Piñera isn’t a stranger to ideologically sloppy statements. During his first term as president, at the ceremony marking the founding of CELAC in Caracas on December 3, 2011, Piñera, together with Hugo Chávez and Raúl Castro, proclaimed, “Long live the differences!”, relativizing the region’s varied political systems. In doing so, Piñera placed Chilean democracy on equal footing with Venezuelan autocracy and Cuban single-party dictatorship.

This sad precedent makes it unsurprising—but still unfortunate—that on April 25 in China, hardly a month after founding PROSUR, Piñera again stated that “every country has a right to the political system of its choosing,” choosing silence in the face of ongoing violations of human rights in the world’s largest dictatorship.

Here, it’s worth returning to a few of the cases included in the fifteen-page report of the Office of the United Nations High Commissioner for Human Rights in November 2018 as part of the third cycle of the Universal Periodic Review of China in the UN Human Rights Council:

In defense of Piñera, it has been said that his task is to defend the interests of his country, taking into account that China is Chile’s main trading partner. Risking that relationship by prioritizing the defense of human rights would be politically dangerous for Piñera.

But a leader who promotes a regional body that affirms “the promotion, protection, respect and guarantee of human rights and fundamental freedoms” cannot travel to the world’s largest dictatorship a month later and praise the right to national self-determination of its political system—irrespective of popular demands and rights—if he wants PROSUR to be taken seriously.

With this rhetoric, Piñera stands to lose credibility as a regional and international leader in the defense of democracy and human rights.

Gabriel Salvia is the Director General of the Center for the Opening and Development of Latin America (CADAL).