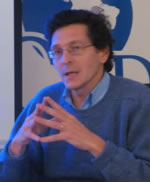 The first semester of 2003 will go into history as a pause and deterioration in the world democratic development. The invasion of Irak shocked worldwide conscience and showed the long way remaining to build an international order that respects human rights, even in some of the most admired democracies in the world. Dictatorships took advantage of the situation. Behind the smoke curtain caused by the invasion, the Cuban regime make the most of it trying to destroy the internal dissidence, thus trying to close a crak that had been opened. This book collects beats of free journalism in Cuba, that is maybe the backbone of the dissident movement. The new Cuban press is showing how to build the foundations of democracy under the roof of dictatorship.

The writing of this book had three moments. The first one was when from Buenos Aires, the author started to make long phone calls to Cuba. In these conversations he reconstructed the life stories of Cuban independent journalists. The second moment was when que came back from his trip to the island in February 2003 (where he was imprisoned and later deported) and completed those life stories with the field experience he had with them. The third moment was the most shocking one, since when he was about to finish the first version of the book, the dictatorship did a crackdown on dissidents as it had never done before, tens of journalists with home he had met were sent to prison. The characters that were part of the book had been silenced. But that was not the last surprise the regime had prepared.

For those interested professional and intelectually with the relationship between politics and journalism, this book offers a description full of shades and personal stories that prevent from falling in easy explanations.