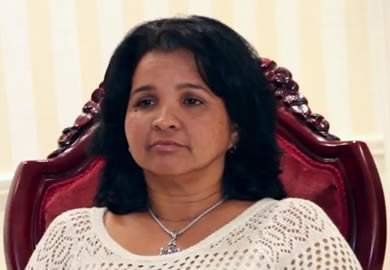 Gálvez’s sentencing includes the seizure of her home, which also serves as the headquarters of the Centro de Estudio Convivencia. The building will become property of Pinar del Río’s Municipal Housing Office. These sanctions were, according to the government, intended to make the accused realize her mistakes and serve as an example to the general population.

As part of the three years of restricted freedoms included in her sentencing, Gálvez will not be able to vote, run for any political office, nor hold any leadership position within the state’s political or administrative offices.

Furthermore, Gálvez will not be granted a passport nor allowed to leave the country until the sanctions are lifted.

As explicitly indicated in the court documents, which were published by the CEC, her sentencing is intended to “repress, reeducate, and prevent” further offenses. It is worth noting that Karina Gálvez had already been detained on January 11th of this same year for a period of seven days.

As a result of these unfortunate happenings, the Centro de Estudios de Convivencia finds itself once again without  headquarters in Cuba (the first time was in 2009). Within the Cuban context, where the freedom of assembly is repressed, the CEC, as everyone else, is simply trying to exercise its freedoms of assembly and expression.

The CEC’s mission is to “organize a systematic and coordinated forums consisting of citizens, professionals and experts – both living in Cuba and from across the diaspora – who will brainstorm, propose, and debate possible short, medium, and long-term solutions to the country’s main social and economic problems.”

CADAL condemns the Cuban military dictatorship’s new repressive attitude and the continuation of its coercive policies that restrict the freedoms of association, assembly, and expression.

Finally, in response to this particular case and the general repression of fundamental liberties that is occurring in Cuba, CADAL calls for the United Nations to implement an intervention by both the Special Rapporteur on the Rights to Freedom of Peaceful Assembly and of Association and by the Working Group on Arbitrary Detention. CADAL asks that these actions be taken while keeping in mind that Cuba has been elected and re-elected as a member of the UN Human Rights Council on two occasions.