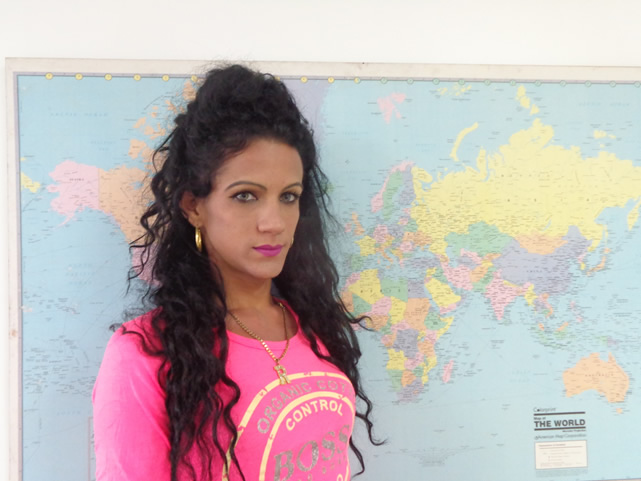 Leodán traveled to Argentina upon invitation from CADAL to participate in training workshops, hold meetings with LGBTI organizations and other social organizations, and undergo medical treatment (she is HIV positive and her health has severely deteriorated). Because of her status as a political dissident and activist, she is refused treatment in Cuba.

In a recent interview with the Diario de Cuba, she stated that she has faced obstacles in her pursuit of treatment for some time now in both the Abel Santamaría Hospital in Pinar del Río and the Instituto de Medicina Tropical (IPK) in Havana.

Just as it had happened during her exit from Cuba at the end of March, Leodán was harassed and mocked and her belongings were searched and partially confiscated at the airport while she passed through immigration. However, upon her return to Cuba, she was also detained. She was then taken to an office where there were immigration agents, disguised State Security agents, and several police officers that spit in her face. They confiscated some of her books, including “History of Homosexuality in Argentina” by Osvaldo Bazán, and money. She was told that they were updated on all of her activities in Cuba and everything she has said in interviews and through other means against the regime. She was also told that, if before she could not access her necessary medical treatment, now, due to her “counter-revolutionary activities,” this access would be much more restricted.

Suárez Quiñones is transgender, and, during her many detentions, she has always faced mistreatment and discrimination by Cuban police officers and State Security agents, an experience faced by a large portion of the Cuban LGBTI community. While the regime vociferously advocates for inclusion, in reality it practices repression and minority persecution, especially against those who do not align themselves with the revolutionary ideology.

During her time in Buenos Aires, Leodán met with international political analyst Álvaro Zicarelli, who gifted her the book authored by Osvaldo Bazán. She also met with head of the national Ministry of Security’s Diversity and Antidiscrimination Area, Mara Pérez Reynoso.

CADAL calls on Argentina’s government authorities to continue communications with the Cuban Embassy in Buenos Aires in order to formally express their condemnation of these type of arbitrary acts to which pacific Cuban dissidents are submitted when they visit our country.