Press Releases
Joint petition to the European Union by CADAL and FREEMUSE
June 4, 2018
Both institutions requested that the Delegation of the European Union in Cuba includes in their cultural cooperation programs the independent artistic initiatives looking to defend the right to freedom of expression and not extending the illegality status that government has impose to them.
Tweet 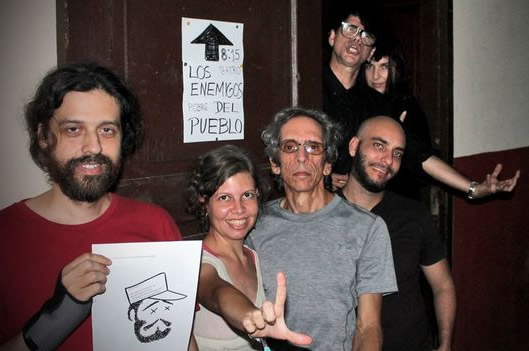 The directors of CADAL and the Danish organization FREEMUSE, Gabriel Salvia and Srirak Plipat, sent a joint petition to Edita Hrdá Director for the Americas at the European Union, raising their concern over the proliferating discrimination towards arts organizations and independent initiatives in Cuba by the Cuban authorities. Both institutions request that the Delegation of the European Union in Cuba includes Cuba’s independent artistic initiatives in the economic and cultural negotiations and policy to uphold the human right to freedom of expression in Cuba.

The Cuban authorities are continually subjecting artists to threats, persecution and numerous short detention periods just for expressing their views and thoughts through art. In the statement they refer to cases such as the detention of the artists and activists Lía Villares and Luis Trápaga by the Cuban security forces and the confiscation of Ms. Villares' belongings, the persecution and harassment by the State Security to artists like Tania Bruguera, Luis Manuel Otero, Iris Ruiz, Adonis Milan, among others.

Furthermore, the January 2018 report by the United Nation’s Special Rapporteur in the field of cultural rights outlines the importance of artistic freedom providing significant contributions towards creating, developing and maintaining societies in which all human rights are increasingly realized.