Press Releases
A condemnation of the unjust sentencing of our colleague Nabeel Rajab
November 24, 2017
The director of the Bahrain Center for Human Rights was sentenced to two years in prison for giving interviews on television in which he recounted the history of human rights and their violations in Bahrain.
Tweet 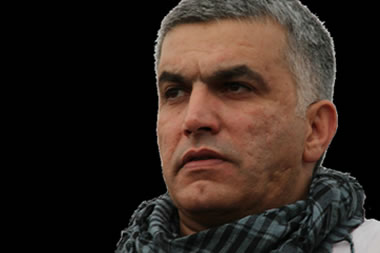 This past 22nd of November, the Bahraini Appeals Court sentenced Nabeel Rajab, a journalist, activist, and director of the Bahrain Center for Human Rights, to two years in prison for giving TV interviews in which he spoke about the history of human rights and their violations in Bahrain.

According to sources close to Rajab, the trial was riddled with procedural errors: Nabeel Rajab was sentenced in absentia for “deliberately spreading false information and malicious rumors with the goal of discrediting the state” (art. 134 of the Penal Code). Moreover, the defense’s evidence was rejected. The activist remained detained while he waited for the appeal, and he now faces additional charges related to his use of Twitter: he faces more than 15 years of jail time for using the social network to express his opposition to the war in Yemen and the Jaw prison conditions.

In October, several human rights organizations called for the Bahraini government to protect Rajab against the harassment and degrading treatment that he has been receiving during his time in the Jaw prison. He has been subjected to humiliating body searches by the prison guards; they shaved his head in what they called an act of retaliation against the denouncements that the activist had made concerning the conditions and inhumane treatment in the prison.

It is known that the Jaw prison lacks adequate medical facilities. Moreover, there have been denouncements of violent outbreaks and beatings of the prisoners and political activists. Hygiene in the prison is also deplorable. Bahraini authorities have prohibited independent and international investigators from visiting the jail, and no UN official has had access to the prison.

CADAL’s Democratic Solidarity Program expresses its concern over the unjust trial and imprisonment of our colleague Nabeel Rajab, in addition to the precarious prison conditions. We condemn the sentences in Bahrain that are violating universal human rights, and we call on the foreign ministry’s of democratic governments to intervene for his liberation and demand the respect of fundamental liberties in Bahrain.