Press Releases
CADAL requests to the governments of Argentina and Chile to apply the principle of reciprocity with Cuba in their relations with the political opposition
July 9, 2018
The request from CADAL bears the signature of its Executive Director, Gabriel C. Salvia, who expressed: «I am hopeful that both the government of Macri and the government of Piñera will act with dignity, conviction and political openness in its bilateral relations with Cuba. In other words, I hope they do not forget how they thought and acted when they were in the opposition».
Tweet 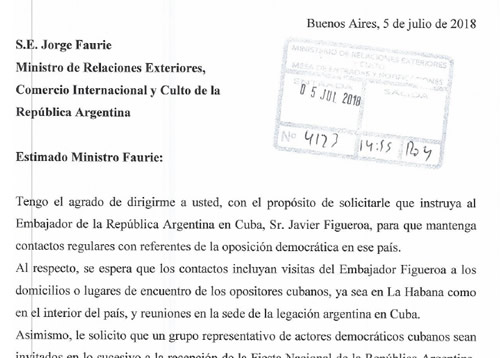 The Center for the Opening and Development of Latin America (CADAL) filed a request to the Argentina and Chile Ministers, Jorge Faurie and Roberto Ampuero, respectively, for their ambassadors to be instructed in Cuba to maintain regular contact with representatives of the democratic opposition in this country.

CADAL substantiated its petition with the principle of reciprocity that characterizes the diplomatic relations among States. In this regard, CADAL provided examples of the active and public relationship that the Embassy of Cuba maintains both in Argentina and in Chile, with political representatives who oppose the governments of president Mauricio Macri and president Sebastián Piñera. For that reason, CADAL believes that both countries should also include the democratic opposition in Cuba in its relations and links in this country.

CADAL requested Mauricio Macri’s and Sebastián Piñera’s Ministers for contact to include visits from their respective ambassadors to the Cuban opponents’ residences or meeting points, be it in Havana or in other parts of the country, as well as meetings in the headquarters of their diplomatic missions.

At the same time, CADAL asked both Ministers for a representative group of Cuban democratic actors to be invited from then on to the reception offered for the celebration of the National Holiday.

On the other hand, CADAL clarified that while the Cuban government considers its opponents as illegal, the Republic of Argentina and the Republic of Chile declare that they will base its foreign policy on the respect and promotion of human rights. For this reason, it does not seem coherent to extend the illegality to the Cuban democratic representatives that the one-party regime imposes on them.

Examples of relations with political opponents and critics of both the Argentinian president Mauricio Macri and the Chilean president Sebastián Piñera, are published online by the Embassy of Cuba in these countries.

Consequently, CADAL points out that the government of Cuba will have to accept -according to the principle of reciprocity – the Argentinean and Chilean diplomats in Cuba will carry out exchanges with representatives of the democratic opposition to address current politics in both countries, Latin America, etc.

CADAL hopes that this request becomes effective and turns into a State policy in Cuba as well as in other closed societies.

Below, there are some of the public activities of the Embassy of Cuba in the Republic of Argentina with political opponents to the government of Mauricio Macri:

(March 21st, 2017) The Ambassador of the Republic of Cuba to Argentina, Orestes Pérez, was received by the President of Grupo de Amistad con Cuba in the Argentine Nation Senate, María de los Ángeles Sacnun, together with other senators who are members of this group.

(March 22nd, 2017) National Senator Alfredo Luenzo received the third secretary of the Embassy of Cuba, Gretter Alfonso, in his office in the Legislative Palace.

(May 30th, 2017) Ambasador of Cuba, Orestes Pérez, received National Senator, Fernando “Pino” Solanas (Proyecto Sur). During this encounter, Pino Solanas commented on his recent research related to the evolution of the energetic situation in the country, specially the situation with hydrocarbon resources and its exploitation. He also presented on the Argentinean political and socioeconomic history of the last few decades.

(December 15th, 2017) National Senator for Río Negro, María Magdalena Odarda member of the Parliamentary Group Amistad con Cuba in the Senate, received Cuban Ambassador to Argentina, Orestes Pérez, in the headquarters of the Legislative Palace. They exchanged views on the reality of Cuba and Argentina and on the Cuban collaboration projects that are happening in the South American country.

With regards to public activities from the Embassy of Cuba in the Republic of Chile with political opponents to the government of Sebastián Piñera, the next examples are shared:

(March 10th) Ambassador Jorge Lamadrid Mascaró paid a visit to the headquarters of Partido por la Democracia, where he was received by its president and other members of the organization.

(March 10th) Ambassador Jorge Lamadrid Mascaró paid a visit to the headquarters of Partido Radical. He was received by the president and vice-president of the party organization.

(May 15th) In the last few days, Cuban Ambassador has held meetings with representatives of the Chilean Congress. Last week he had a fruitful meeting with the President of the Chamber of Deputies, as well as with some other legislators from different parties, such as the Communist Party, the Christian Democratic Party, the Socialist Party and the party Poder, among others.

(May 16th) Ambassador of Cuba received Camilo Lagos, Partido Progresista president, and Pedro Abarca, secretary-general, aiming at exchanging information about the state of the relations between this organization and the Communist Party in Cuba and the organization of working visits. In this friendly meeting, they discussed the current political situation in our region.

(June 12th) Ambassador of Cuba, alongside some other Latin-American colleagues, attended an event held by the Chilean Communist Party marking its 106th anniversary and in memory of the 500 communist militants that were killed during the Pinochet dictatorship, who were posthumously awarded the Luis Emilio Recabarren medal.

Letter from CADAL to Jorge Faurie