Press Releases
Solidarity with Bahraini detained activist Nabeel Rajab
July 11, 2017
On July 10th, Nabeel Rajab, one of the most renowned activists in Bahrain, was sentenced to two years in prison for charges related to a TV show in which he allegedly spreads rumors and false information about the country''s current situation that undermine the prestige of the state.
Tweet 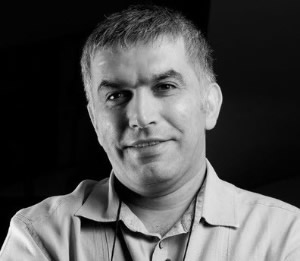 According to claims made by Bahrain Center for Human Rights (BCHR), Amnesty International and Associated Press, the case of Rajab is of paramount importance as he was one of the key figures in the 2011 Arab Spring. Amnesty interprets this course of action by the Bahraini officials as a signal that there will be no movement towards freedom of expression. Different human rights groups reported that Rajab, who has been kept prisoner since June 2016, was placed in solitary confinement for 9 months. During this time, his health condition deteriorated and he had to be hospitalized in April making him incapable of attending nine court hearings that demanded his presence.

BCHR reports that, out of protest against the way authorities treated Rajab, his lawyers did not participate at these hearings either. International diplomats, who attended the trial as observers, opted for the same conduct and withdrew.

Meanwhile, Rajab already awaits a second trial due to his social media activity. He posted two tweets in which he criticized torture in Bahraini prisons, the conflict in Yemen in general and the bombardment of rebel groups carried out by the Saudi-led coalition of which Bahrain is a member, in particular. This trial will take place on 10 August. The charges include insulting a state body, disseminating false information and insulting a neighboring country.

With this note, CADAL wishes to express its concern for the incarceration of Nabeel Rajab. The behavior of the Bahraini administration is unacceptable as it seeks to undermine the fundamental right to express one's opinion. Furthermore, CADAL calls up all democratic nations in the world to demand Rajab's release and assist in improving the human rights situation in Bahrain.