Press Releases
CADAL nominated Dagoberto Valdes for the 2015 Homo Homini Award for 2015
December 1st, 2015
The Puente Democrático Program of the Center for the Opening and Development of Latin America submitted to the Czech foundation People In Need, the nomination of the Director of Convivencia Project, Dagoberto Valdes Hernandez, for the Homo Homini Award 2015.
Tweet 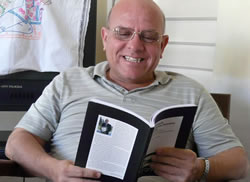 Dagoberto Valdes Hernandez is a Cuban Catholic intellectual dissident founder of the digital cultural magazine Convivencia (www.convivenciacuba.es). Previously, he was founder and director of the Center for Civic and Religious Formation and the Vitral magazine, published by the Archdiocese of Pinar del Río until 2007 when the center and the magazine were closed.

In the nomination it is emphasized that through Convivencia, Valdes Hernandez works for the empowerment of citizens, for the democratic future of Cuba; to cure the anthropological damage of all Cubans due to totalitarianism and to overcome the ethical and civic illiteracy of Cuban citizens after more than half a century of communist indoctrination.

Since 1994 People in Need awards annually the Homo Homini Award to individuals who have contributed greatly to the promotion of human rights and democracy and made non-violent solutions to political conflicts.

Founded in 1992 and having worked in more than 40 countries worldwide, People in Need focused primarily on humanitarian aid, development and human rights. It also organizes the documentary festival “One World“ that has become the largest festival of documentaries on human rights in the world. Until his death, former Czech President Vaclav Havel, personally handed over the Homo Homini Award to the winner.